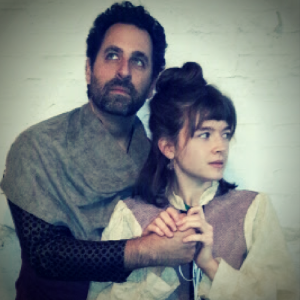 “A poetic fantasy of rare splendor and delight…a work of magical humor and deep beauty.” ~ The New York Herald Tribune

It is the dawn of the 15th century in the small English market town of Cool Clary.

The mayor’s family, busy with preparations for an engagement party, find themselves stuck with two uninvited guests — who may have to be executed in the morning!

First a discharged soldier arrives, demanding to be hanged for unspecified crimes. Then comes a young woman, pursued by an angry mob who demand she be tried for witchcraft. In contrast to her coincidental companion, the young woman has no wish to be burned at the stake.

What is going on here? The street’s gone mad, and all’s not well within. It’s enough to make one lose one’s faith in human nature.

One reviewer marveled at Fry’s “insistence on the wonder of human life and the capacities of human beings, individually and collectively, for the growth of soul and conscience.”

Said another: “He mingles drama and poetic language, humor and tragedy, metaphysics and wit in an Elizabethan richness that invites comparison with Shakespeare and T. S. Eliot.”

Read The Lady’s Not for Burning blog posts, written by cast and crew.

Special thanks to: The Flying Hammond-MacGregors for all their generosity to the Players, especially the opening up of their home for set construction and storage; Augustana Lutheran Church for their generous provision of space for rehearsals and the loan of a lectern for this production.

The Lady’s Not for Burning is presented by special arrangement with Dramatists Play Service, Inc., New York

Founded in January of 2009, the Hyde Park Community Players is a non-profit, amateur, volunteer organization whose mission is to create compelling theatre by and for residents of the South Side. END_OF_DOCUMENT_TOKEN_TO_BE_REPLACED

You can make your contribution to our work here at the Hyde Park Community Players. There are lots of ways to give! END_OF_DOCUMENT_TOKEN_TO_BE_REPLACED