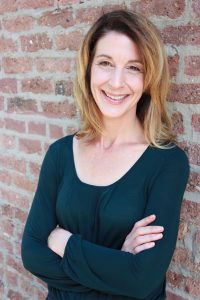 Today we introduce Samantha Fenno, who plays Malvolia (Malvolio was written as a man; in our production, she’s a woman, hence the vowel shift). Samantha grew up in Long Island, attended graduate school in Baltimore, and came to Hyde Park as a postdoctoral fellow in the humanities at the University of Chicago.

Q. How did you find out about this show, and what made you want to audition for it?

SAMANTHA: I have been eyeing various HPCP audition posters around the neighborhood for the past year or so. I teach Shakespeare sometimes, and thought it would be exciting to try to really experience one of his plays from a performance perspective. I suppose that’s about ways of reading for me. It’s been an adventure so far.

Q. What do you think you know about your character now, about halfway through rehearsals, that you didn’t know before?

SAMANTHA: So many things! First, she’s female. (I wasn’t sure at first.) And she’s about my age. (One might think I’m old for the part.) Also, she’s…complicated. I spend a lot of time thinking about what motivates her, about how she ended up being who she is at the play’s opening, and for that matter, about who exactly she is. Sometimes I think about whether she’s a lesbian or not, and whether that matters. If she’s not, what is it that she wants? It has been a fascinating process to allow the gender change to recontextualize Shakespeare’s lines and see what emerges. Hopefully the end result is something coherent!

SAMANTHA: I think that like so many of the characters in this play, Malvolia deeply wants to be loved. She’s bitter because she does see, to an extent, that playing by the rules doesn’t get her there. I think she does know that the “lighter people” (as she refers to Sir Toby, et al.) dislike her, but she’s trapped by (among other things) her sense that she is in the right, her belief that a worthy and desirable person such as herself ought to be loved and respected, and on very particular grounds. But of course she also doubts that. I think she feels alienated because she is watching people being frivolous and having fun, and this is something that she has blocked in herself.

Q. What kind of theater did you do before joining the cast of Twelfth Night? Do you have a favorite play or a favorite role?

SAMANTHA: Acting is a midlife discovery for me. Three years ago, and pretty much on a lark, I started taking improv classes at Second City. One of my improv teachers (the fantastic Jess Mitolo) told me I should try acting—so I enrolled in the Second City acting program. We worked on dramatic monologues and scenes and I found the work fantastically absorptive. Last June, I was in a sketch comedy at Second City called Secrets and Lies. As to my acting bio prior to three years ago: I think I was a court jester in my 5th grade class’s production of Alice In Wonderland. And a sister or a cousin or an aunt (hard to remember which!) in a 6th grade production of HMS Pinafore. I played in a lot of pit orchestras in high school and college—usually squeaking out trombone parts on the bassoon.

Q. Is there anything else you’d like people to know about you?

SAMANTHA: I don’t think so. It’s been a delight to work with Leslie, Shonte, and the other actors, and a treat as well to experience the neighborhood in a new way.

Announcing Our 2022 Season!
Congratulations to the cast of AS YOU LIKE IT!
Welcome to the An Ideal Husband Blog!
Propose a Show for 2018-2019

Founded in January of 2009, the Hyde Park Community Players is a non-profit, amateur, volunteer organization whose mission is to create compelling theatre by and for residents of the South Side. END_OF_DOCUMENT_TOKEN_TO_BE_REPLACED

You can make your contribution to our work here at the Hyde Park Community Players. There are lots of ways to give! END_OF_DOCUMENT_TOKEN_TO_BE_REPLACED