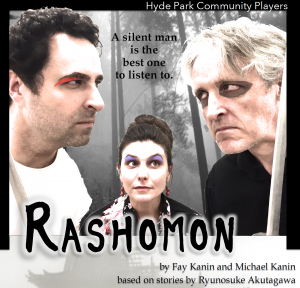 Based on the short stories of Ryūnosuke Akutagawa and inspired by Akira Kurosawa’s film of the same name, Fay Kanin and Michael Kanin’s play Rashomon turns the story of a violent encounter into an exploration of the nature of truth itself. One day, on the road to Kyoto, the bandit Tajomaru rapes a samurai’s wife. The samurai himself later turns up dead. And everyone–the wife, the bandit, even the dead man–has a different story to tell about who killed him and why.

On a rainy night at the Rashomon Gate, the woodcutter who found the body and the priest whose faith has been shaken by the conflicting testimony at the trial encounter a misanthropic wigmaker. Together they revisit these stories, hoping to discover where the truth lies. They can’t all be true. Can any of them be true? Could it be that nothing is true?

Full of swordplay, music, and movement, Rashomon is a tragic, suspenseful, provocative, and at times darkly comic tale for our times. Tickets ordered in advance are $12 / $10 for students and seniors. Tickets can be purchased at the door for $15/ $12.

Mariana Pineda by Federico Garcia Lorca, translate...
Meet Amber Ace, one of the As You Like It singers!
Friday Staged Reading: The Merry Wives of Windsor
Our 12th Annual Evening of Horror & Suspense ...

Founded in January of 2009, the Hyde Park Community Players is a non-profit, amateur, volunteer organization whose mission is to create compelling theatre by and for residents of the South Side. END_OF_DOCUMENT_TOKEN_TO_BE_REPLACED

You can make your contribution to our work here at the Hyde Park Community Players. There are lots of ways to give! END_OF_DOCUMENT_TOKEN_TO_BE_REPLACED