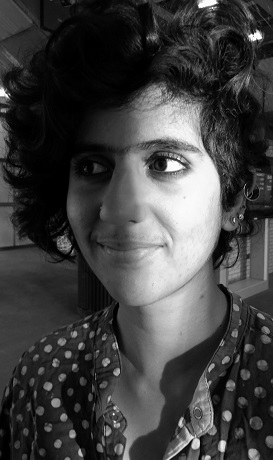 Tanima makes her HPCP debut as Joby in Anton in Show Business. (TICKETS) Tanima is a (reluctant) PhD student at the University of Chicago. She has done plays with community, amateur, and professional theatre groups in India, the UK, and Chicago.

Tanima: I saw the posters. I’ve been itching to get back into theatre and thought I would audition and see what came of it!

Tanima: I’ve been interested in theatre ever since middle school. While growing up I lived very close to a performance space in Bangalore, India and watched at least one play a week for several years. I joined my first group doing playback theatre when I was 16, and ever since have been acting, directing, and conducting workshops – both in traditional proscenium settings as well as in street plays. Of late I haven’t been doing plays with the same frequency I used to – but the craft of devising theatre with a group of people in a process of creative collaboration, with no leaders or followers, is what exhilarates me most.

Tanima: The challenge is to be a character who is plausible as a part of the play and simultaneously a relatively inconspicuous outsider to it – so that her metatheatrical interjections are not just smart in an annoying way but add to the humor. When given the chance to speak, Joby goes on about the flaws of the play (and of American theater in general) without really providing an alternative vision for what is to be done. But she’s also very flawed herself, and that is a fun balance to portray.

Q. Based on your experience, is the rehearsal experience different when you’re part of an all-woman cast? If so, how?

Tanima: I’ve done one other all-woman production – an adaptation of Macbeth – and in both that and in Anton, highlighting the consequences of performing gender was a big part of the story. There are many things that make up a rehearsal, and affinities and divides other than gender are also present in the room. Having said that, playing with gender, with all its sillinesses, explorations, anxieties, and solidarities can be a great vibe to be part of! Some of the satire in Anton is about difficult subjects too – and while it is meant to unsettle, having an all-woman cast definitely made certain jokes easier to bear. Also there were times when an actor brought along her young daughter to rehearsals or people brought and shared (homemade, even!) snacks, making a lovely environment of camaraderie and care amidst all the hard work.

Founded in January of 2009, the Hyde Park Community Players is a non-profit, amateur, volunteer organization whose mission is to create compelling theatre by and for residents of the South Side. END_OF_DOCUMENT_TOKEN_TO_BE_REPLACED

You can make your contribution to our work here at the Hyde Park Community Players. There are lots of ways to give! END_OF_DOCUMENT_TOKEN_TO_BE_REPLACED