Today we catch up with As You Like It’s director and producer, Corinna Christman. Corinna is one of the founding member of the HPCP and our current president. 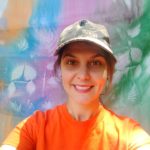 Q. What made you want to direct As You Like It?

CORINNA: I have loved this show since I was in 7th grade and played Ganymede- the disguised version of Rosalind. I appreciate how the women take matters into their own hands.  I enjoy the various portrayals of love and lust, and I have always thought the “trial run” Rosalind gives Orlando is very entertaining.  The women are the voice of reason- both Phebe and Rosalind call out their lovers for trying to emotionally manipulate them. It’s a very playful play, and everyone is redeemed in the end.

Q. Since all of Shakespeare’s locales are fantasy to some extent, as a director you have a lot of freedom about when and where you want to set it. Do you have a specific historical era or geographical location in mind? Is there a particular atmosphere or mood you want the staging to evoke?

CORINNA: The first act, in the court, has a contemporary, royal family feel.  Everyone has their phones out.  Everyone is aware that their actions could end up being viewed by a million people online, so they adhere to strict societal and court rules.

When we move to Arden, we are evoking a Renaissance Faire, where the characters get to be who they always wanted to be, or explore or play with their identities.

Q. As one of the “green world” plays, As You Like It is a great show to do outdoors in Nichols Park. What’s your take on the relationship between the Forest of Arden (where all the exiled characters are living) and the world of the Court, over which the evil Duke presides? Are they opposites? Two sides of the same coin? Something else?

CORINNA: They are very different. I actually have two actors, Meara Hammond and Elizabeth Grumer, playing courtiers in both worlds. We worked with their physicality and imagined what it would be like to be in the court, with all its rules, plots and suspicions, as opposed to the forest, where everyone feels unrestricted and at ease. I also wanted to examine how the same person could be very different depending on their situation. The courtiers are stiff, sly and conniving in the court, but the same people are happy and playful in Arden.

Q. Like last year’s Shakespeare play (Twelfth Night), As You Like It is built around a heterosexual romance in which the woman is, most of the time, passing as male. What would you say Shakespeare is doing with this convention in AYLI that’s different from what he was doing with it in Twelfth Night?

CORINNA: I am not sure about Shakespeare, but, since we are doing the costumed, Renaissance style, Rosalind is not really “passing” as a man.  She is caparisoned like one, of course, but most of the other characters make it clear that they know she is a woman and they are playing along with her.  Orlando recognizes her from the start, and their “curing process” is more like an extended role play.

Q. There’s a lot of singing in As You Like It–and a lot of jokes about singers. How are you incorporating music into the show?

CORINNA: We have a great musical troupe, led by Bill Hohnke.  He has re-arranged the music, and they sing and play ukeleles, drums and tambourines!  Each musician has their own personality and relationship to music.

Q. The resolution of As You Like It presents some challenges for a modern audience that’s used to realism. Can you talk about how you’re approaching it?

CORINNA: We are embracing the fact that it is not realistic at all.  Hymen and Jaques de Boys just show up at the end and wrap up all the loose ends.  They are played by actors who have been onstage for most of the show, and they will not look that different.  It is very “Deus ex machina” and so we’re going with it!

CORINNA: I love being outdoors because nature provides us with a built-in, gorgeous set with no effort on our part.  Sitting in Nichols Park on a summer’s evening performing Shakespeare seems like the best thing we could be doing with our time.

The biggest challenge is also nature.  Sometimes the elements decide to cancel rehearsal or drown out our words, so we just have to work together.

Q. Is there anything else you’d like us to know about the show?

CORINNA: The cast is brilliant!  Each couple has their own unique dynamic and the forest court is hilarious.

Founded in January of 2009, the Hyde Park Community Players is a non-profit, amateur, volunteer organization whose mission is to create compelling theatre by and for residents of the South Side. END_OF_DOCUMENT_TOKEN_TO_BE_REPLACED

You can make your contribution to our work here at the Hyde Park Community Players. There are lots of ways to give! END_OF_DOCUMENT_TOKEN_TO_BE_REPLACED