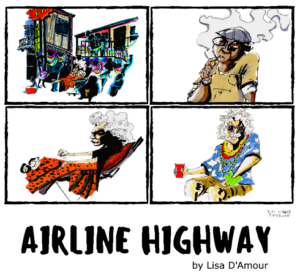 Friends of all genders and backgrounds are encouraged to audition.

Set in post-Katrina New Orleans, Airline Highway takes place in the parking lot of The Hummingbird Motel, off the titular highway near the city, where the residents have gathered to celebrate the life of Miss Ruby, an iconic burlesque queen who has been a mother figure to them all. Miss Ruby’s life is nearing its end, and she requests that her funeral takes place while she is still alive. As the Mardi Gras-esque celebration continues into the night, the stories of the residents, their pain and disappointments unfold.

Airline Highway is a vibrant portrait of a loving, messy, chosen community. One of the beautiful things about humans is that when life doesn’t gift us with a naturally loving family, we create our own. Observing this particular community, we are able to see the inherent challenges they face from within and from without, and how difficult it is for them when members choose to leave. When you choose to leave your chosen family, can you ever come back?

TERRY – African American, could be any age between 45 and 55.  Originally from the country, New Iberia, LA, but he has been in New Orleans for quite some time.
KRISTA – Early 30’s, grew up in a small town in northern Mississippi, before moving to Mobile, AL and the Slidell, LA. Now works as a dancer/stripper.
WAYNE – White, early 60’s.  Of old-school, working-class, Irish-German-NOLA descent. Manager of the Hummingbird Hotel.
SISSY NA NA – African American, trans-feminine bartender and karaoke wrangler at the Cat’s Meow on Bourbon Street.
TANYA – 50s-60s. Old-school dancer/sex worker.
FRANCIS – Mid 50’s. A young soul, an artist, a poet.
NURSE’S AIDE – African American, female, 55+ years old.
BAIT BOY – White, mid 30’s. Former member of the community now trying to “pass” as an educated suburban man.
ZOE – White, 16, Bait Boy’s stepdaughter. Intellectually curious, but naïvely sheltered.
MISS RUBY – 75+, infamous Bourbon Street burlesque performer. The “mama” of Bourbon Street.
JUDGE HARMON – 70’s, friend of Miss Ruby’s.
MAN ONE – A john.
MAN TWO – Another john.
SHADY CHARACTER ONE – Male, between 20 and 40.
SHADY CHARACTER TWO – Female, between 20 and 40.
SHADY CHARACTER THREE – Male, between 20 and 40.
PARTY GUESTS – seven or more, an assortment of ages and races.

Founded in January of 2009, the Hyde Park Community Players is a non-profit, amateur, volunteer organization whose mission is to create compelling theatre by and for residents of the South Side. END_OF_DOCUMENT_TOKEN_TO_BE_REPLACED

You can make your contribution to our work here at the Hyde Park Community Players. There are lots of ways to give! END_OF_DOCUMENT_TOKEN_TO_BE_REPLACED