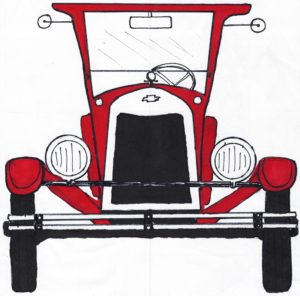 The Happy Journey to Trenton and Camden

Almost the entire play takes place during an automobile journey from Newark to  Camden, New Jersey, by a family on their way to visit a married daughter, who has recently been very ill. The father, mother, and children reminisce, joke, and sightsee and somehow, in classic Thornton Wilder fashion, capture something of the universal joy and sadness of life as they motor along.

Comparing this play with his later masterpiece, Our Town, Wilder said in 1974, “In my plays I attempted to raise ordinary daily conversation between ordinary people to the level of the universal human experience.”In his 1931 “Notes to the Producer” Wilder wrote: “It should constantly be borne in mind that the purpose of this play is the portrayal of the character of Ma Kirby…. Ma Kirby’s humor, strength and humanity constitute the unifying element throughout.”

Wilder scholar Eric Specian says: “A family car trip occurs on a bare stage. Yet the ordinary is only the setting for an investigation of extraordinary existential issues. In this family drama, nothing much happens–and yet everything important happens.”

The reading will be staged at our usual time and location, 8 pm, at Augustana Lutheran Church, 5500 S. Woodlawn Avenue.  Following the reading, there will be treats and a chance to talk about the play with the actors, director and with one another.  Admission is $5 at the door.

Founded in January of 2009, the Hyde Park Community Players is a non-profit, amateur, volunteer organization whose mission is to create compelling theatre by and for residents of the South Side. END_OF_DOCUMENT_TOKEN_TO_BE_REPLACED

You can make your contribution to our work here at the Hyde Park Community Players. There are lots of ways to give! END_OF_DOCUMENT_TOKEN_TO_BE_REPLACED