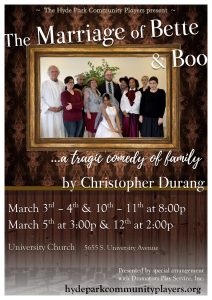 “Christopher Durang is one of the masters of modern dark comedy, and his acidic and ironic style is at its pinnacle in The Marriage of Bette and Boo. This semi-autobiographical play deals with the pain of living in a broken and dysfunctional family. Durang deftly paints a grotesque and hilarious caricature of his own family, in which alcoholism and mental illness tore apart the marriages of his parents and grandparents. The characters are disturbingly blithe, dealing with issue like stillborn infants and abusive relationships with a chipper sense of irony and ignorance.”
– Shane’s Acting Journal

Meet Imogen – The Great Mage Steve!
The View from the Bench: Love and THE LAST DAYS OF...
August Staged Reading: “A Phoenix Too Freque...
Auditions: An Evening of Horror & Suspense (9...

Founded in January of 2009, the Hyde Park Community Players is a non-profit, amateur, volunteer organization whose mission is to create compelling theatre by and for residents of the South Side. END_OF_DOCUMENT_TOKEN_TO_BE_REPLACED

You can make your contribution to our work here at the Hyde Park Community Players. There are lots of ways to give! END_OF_DOCUMENT_TOKEN_TO_BE_REPLACED