So at last weekend’s prop build, I made the saddest prop cake in the entire world. And not on purpose, either. This week I took another crack at it and it came out much better.

There are two cakes in The Marriage of Bette and Boo. The most important one is the sad cake that Emily makes for Matt’s birthday. That one has to be edible; and that one is going to be made by Shonte, who volunteered for the job. The other is the “large cake” that Paul is carrying when the family arrives for the epic Thanksgiving dinner scene. I thought, well, this will be simple, you just make a cardboard form and put fondant over it. I learned to make marshmallow fondant a few years ago for the All Saints Africa bake sale, and I figured it would be an easy fix.

Well, it would have been, if I had remembered that the fondant has to be chilled for several hours between when you make it and when you roll it out.

Long story short, we wound up with a huge amount of unused harvest-orange fondant and a pathetic object that didn’t really look enough like a cake. So I went back to the drawing board.

Turning to The Google for guidance, I discovered The Prop Agenda, a blog devoted to all things prop maintained by a props master named Eric Hart who works somewhere in North Carolina. Believe me I have bookmarked it. He linked to a ‘recipe’ by, of all people. Amy Sedaris for a prop cake made out of styrofoam and spackle. I thought, well, I’ve been working with spackle for a lot longer than I’ve been working with fondant, let’s give it a try.

Step 1 was finding a styrofoam base for it. I was assured by The Google that JoAnne’s carried such things as cake forms (apparently prop cakes are a fairly common wedding reception accessory), so I went out to the one on Roosevelt Road. They did not have cake forms. They did, however, have circular hoop-shaped styrofoam things that were identified as wreath forms, plus some round styrofoam disks that were about the size and shape of a typical cake layer, so I loaded up on those. They also had some bags of smaller styrofoam balls I picked up to use as decorations. Corinna wanted the cake to be Thanksgiving colors, so I found some acrylic paint in “Pumpkin Spice” and some kelly green to use for the decorations.

The styrofoam forms were easy enough to stick together using some of the wood skewers we always have on hand for satay.

I used toothpicks to dip the little styrofoam balls in the green paint and stand them up to dry:

Making the ‘frosting’ out of plaster of Paris and spackle was sort of a surreal experience. It’s just bizarre to be doing something which could, with equal accuracy, be described as baking or construction. An entire article could probably be written about the way in which this project subverts binary constructions of gender. In fact, as luck would have it, it combines normally disparate elements of the diverse skill set I have been forced to develop in this household, where I am both the chief cook/pastry chef AND the person who spackles over the special defects that occasionally open up in our walls due to time, gravity, sub-par renovation work done by those who lived here before us, and the cats. Lightweight spackle is indeed light and airy, and mixing it into the plaster of Paris and trying to add enough water to get the perfect consistency is in fact not unlike the process of trying to get the perfect consistency for buttercream frosting. But then once you put it on the styrofoam, you have to wait about a day before it’s dry enough to paint.

I was concerned I wouldn’t have enough paint, but turns out that I bought precisely the right amount. Go me! I vastly overbought on the Plaster of Paris, but I’m sure we’ll find a use for it sometime soon. I used some clay we had around the house from one of Zoe’s Christmas presents a few years ago to make a chocolate turkey cake topper: 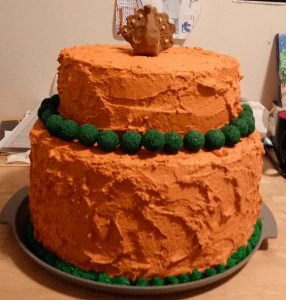 The only edible thing about this cake is the green decorator frosting piped around the bottom. And pretty soon, that won’t be edible either. I don’t even know what they make that stuff out of, but it would not surprise me if it could also be used as a building material. The tray is a leftover from the first show I did props for, Musical of Musicals (The Musical!).

Zoe and I dropped the cake off at rehearsal last night. Because it is very hard to get Zoe out of a room with a rehearsal going on in it, we watched some of Act I. It was really exciting to see what the cast is doing with these parts. They’re all really good, and every scene is its own compelling combination of funny, touching, and painful. Zoe was particularly struck by Emily, and had a lot of questions about her afterward. (“Why does she always feel like everything is her fault?” Well, sweetheart, you will never know how happy it makes me, as a woman who was raised Catholic, see how totally unfamiliar you are with that particular personality quirk.) From seeing rehearsal, I came to a better understanding of how important Paul is. It’s hard to appreciate that when you’re reading it because Paul, who’s had a stroke, can’t communicate; he speaks, but nobody understands him. But in performance, you can see how Paul is the wisest and most compassionate member of the family, and he’s always trying to look out for its most vulnerable members (chiefly, in the part we saw, Emily and Matt). This made me glad I had taken a second run at his Large Cake. Paul has really made an effort here; he’s concerned about Bette and Matt and he’s working hard to show it. And yet, the whole idea of bringing a Large Cake to Thanksgiving dinner is comically inappropriate–Thanskgiving dessert is pie, you can ask anyone in my family–and the color scheme really emphasizes that. He wants to help; he tries to help; it seems like he’s capable of helping; and yet he can’t help, or at least he can’t help enough. It doesn’t matter what that cake tastes like because it’s never eaten; it’s never even cut.

Anyway. The cast is doing really well, the show is going to be great, and I’m really looking forward to OPENING NIGHT on MARCH 3. Yee ha!

Founded in January of 2009, the Hyde Park Community Players is a non-profit, amateur, volunteer organization whose mission is to create compelling theatre by and for residents of the South Side. END_OF_DOCUMENT_TOKEN_TO_BE_REPLACED

You can make your contribution to our work here at the Hyde Park Community Players. There are lots of ways to give! END_OF_DOCUMENT_TOKEN_TO_BE_REPLACED