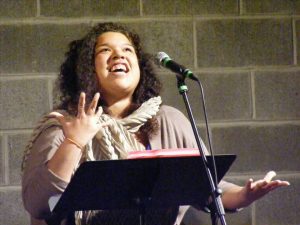 Shonte Wesson has been with the HPCP for several years, and has appeared in numerous Evenings of Horror and Suspense as well as mainstage shows (including Arcadia, 25th Annual Putnam County Spelling Bee, and Clybourne Park). Shonte was the assistant director for Twelfth Night last summer. Shonte’s mother Helen Wesson and her daughter Helena Lee are also both active in the HPCP and both appearing in this year’s radio show.

Q. You’ve been involved with the radio show since at least 2013. What drew you to the radio show? What matters most to you about this part of the season?

SHONTE: The radio show is where I got my start with the Players. That year was not a great one for me. I felt very lost. And then I saw the flyer near my house and thought ‘Why not? I did a little bit of acting when I was a kid.’ And I got to play HopFrog. I remember poring over that part and working so hard. When it was over, I felt like I had found my missing piece. That’s what this show means to me. To have been able to be apart of it every year since feels like I’m paying homage to when my spark was first lit. The fact that I get to now direct the very show that started it all means the entire world to me.

Q. How did you go about selecting the four stories for this year from the vast ocean of vintage radio drama out there?

SHONTE: I always said to myself that if I ever directed a radio show for HPCP ‘The Raven’ would be in it. It’s one of my favorite poems. After I had that nailed down, I listened to hours of radio shows, trying to find things that stayed with me. When I heard the end of ‘Valse Triste’ I remember sitting at my desk at work, staring at my keyboard and saying aloud “Wow, that’s messed up.” I knew that story had to be in it. ‘The Flame’ appealed to me because I loved the sexy, elemental character of The Flame. I loved that ‘Evening Primrose’ started with a scream and ended with one. It just stays with you.

Q. You’ve done your own adaptation of “The Raven,” a text which has been adapted by everyone from The Simpsons to Roger Corman. What are some of the personal touches you’ve put on this story?

SHONTE: I’ve split it up between four people. The issue with ‘The Raven’ is if only one person reads it, it has the potential to become very stagnant and boring, which would be an absolute travesty for such a magnificent poem. I talked a lot about the rhythm of the words with the cast, as some of the sentences are volleyed back and forth between people. It keeps them and the listener on their toes. Plus, there’s an adorable, curly haired Raven, and who wouldn’t love that? Of all the stories it’s the one I worked the hardest on and the one I’m most proud of.

SHONTE: Everything. Everything about this show was rewarding and everything about this show was challenging. When I asked to do this show, I honestly didn’t believe I could. I’m not like some of the other Players. I’ve never taken an acting class or studied it in college, I’m not a theater buff, I’m certainly no academic. I’m a little, round, mostly unremarkable lady who just happens to like acting. And I wanted to challenge myself, just to see if I was capable of doing it. It has been a cluster at times, and I went in with no Assistant Director, which made my task doubly hard! But every time I hit a snag and got to the other side of it, I showed myself that I was capable. That I could handle this. That maybe this is the life I was cut out for. Of course, having a completely exceptional cast, and the backing of a wonderful group of people like the Hyde Park Community Players didn’t hurt. Now I have the opportunity to see the fruits of my labor come to life. What’s more rewarding than that?

Q. What’s the coolest sound effect this year–or would it be spoiling to tell us?

SHONTE: The cast. They scream. A lot. I’m also partial to the fire sound.

Q. Obviously these radio shows were initially intended for an adult audience; but kids do come to this show and they do enjoy it. At what age would you say most kids are ready to appreciate the radio show?

SHONTE: Any age where they are capable of sitting still for longer than five minutes. For my daughter, I’m hoping it’s age seven. But I’ve seen as young as four sit down and enjoy a story. It really depends on the kid.

Q. Tell us about the free goodie bags and the reception!

SHONTE: Anyone who comes to the show IN COSTUME gets a free goodie bag! I just like costumes and want to encourage people to wear them as often as possible. I’m a pretty big fan of baking, so there will be heaps of baked goods for anyone who is brave enough to stay to the end of the show.

Q. Is there anything else you want people to know about this year’s radio show?

SHONTE: I was blessed with an amazingly talented group of people, and I am grateful to each and every one of them for making this show what it is. A splendid time is guaranteed for all. Oh, and BAT BROWNIES!

Founded in January of 2009, the Hyde Park Community Players is a non-profit, amateur, volunteer organization whose mission is to create compelling theatre by and for residents of the South Side. END_OF_DOCUMENT_TOKEN_TO_BE_REPLACED

You can make your contribution to our work here at the Hyde Park Community Players. There are lots of ways to give! END_OF_DOCUMENT_TOKEN_TO_BE_REPLACED