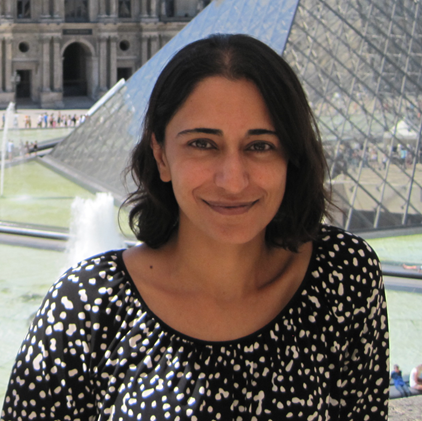 Romana makes her HPCP debut as Holly in Anton in Show Business. (TICKETS) Romana lived in Hyde Park from 1999 to 2004, moved away, and then returned to Hyde Park in 2011.

Romana: Like most people, I found out about the auditions from a flyer on a lamp post. I knew nothing about the play itself but was intrigued because it was a large all female cast. I’ve wanted to act in a play for a long time, but it was really a last minute decision to finally dash out the door and show up to the audition.  For me, participating in the audition was in itself a major personal event.

Q. When did you first get interested in theater? Do you have a favorite show, or a favorite part that you’ve done?

Romana: I was in Arsenic and Old Lace in high school, playing Aunt Martha, an old lady who poisons lonely old men. I truly loved playing this crazy lady. I have the best time when I’m enjoying my performance and laughing on the inside while appearing quite serious on the outside.

Q. Your character, Holly, is a TV star who’s trying to get some credibility by doing theater. She seems to me like a very complex character. Can you talk a little bit about your take on Holly? Who do you think she really is? What does she really want? Why does she go through so many changes?

Romana: Yes, Holly has a lot going on. Quite prominent is her preoccupation with ‘respect’ and her anger when ‘disrespect’ is shown. She has fame and fortune, but respect is elusive.  Don’t disrespect her, she’ll make you pay. I love that this ‘anger’ is also aroused when others are disrespected.

In the beginning her interest in theatre is purely for the credentials she needs to move into film, which she believes will bring her ‘respect’. She doesn’t even pretend to have an interest in acting or the play, any classic style play will do.  Eventually, she discovers a genuine interest and excitement about the play and acting.  So, what happens when she must choose between them?   Would your decision have been different?

Romana: I truly enjoy her range of personality. She displays her anger in a big way, cracks silly jokes, and has quite a twisted take on things. I get an embarrassing amount of satisfaction from playing her craziest moments. I’m enjoying the challenge of interpreting her motivation and mood in each line. Opening night is a few days and I’m still tinkering with her.

Q. Is there anything else you want us to know about you or your character?

Romana: It’s pretty amazing to see everyone put in all their energy, thought and time.  I understand the director’s and actors’ motivations. But the people behind the scenes really amaze me.  Why is that guy up a twenty foot ladder hanging the lights, why did this really busy young woman sew on all these buttons to make my good enough shirt perfect, why is that woman happily pushing chairs around the stage for us. It’s quite something to witness the ‘community’ part of Community Theater.

“Airline Highway” by Lisa D’Amou...
Twelfth Night Introductions: Catch up with Sasha A...
Who’s Who in The Last Days of Judas Iscariot...
Eight Evenings of Horror and Suspense: A Brief His...

Founded in January of 2009, the Hyde Park Community Players is a non-profit, amateur, volunteer organization whose mission is to create compelling theatre by and for residents of the South Side. END_OF_DOCUMENT_TOKEN_TO_BE_REPLACED

You can make your contribution to our work here at the Hyde Park Community Players. There are lots of ways to give! END_OF_DOCUMENT_TOKEN_TO_BE_REPLACED