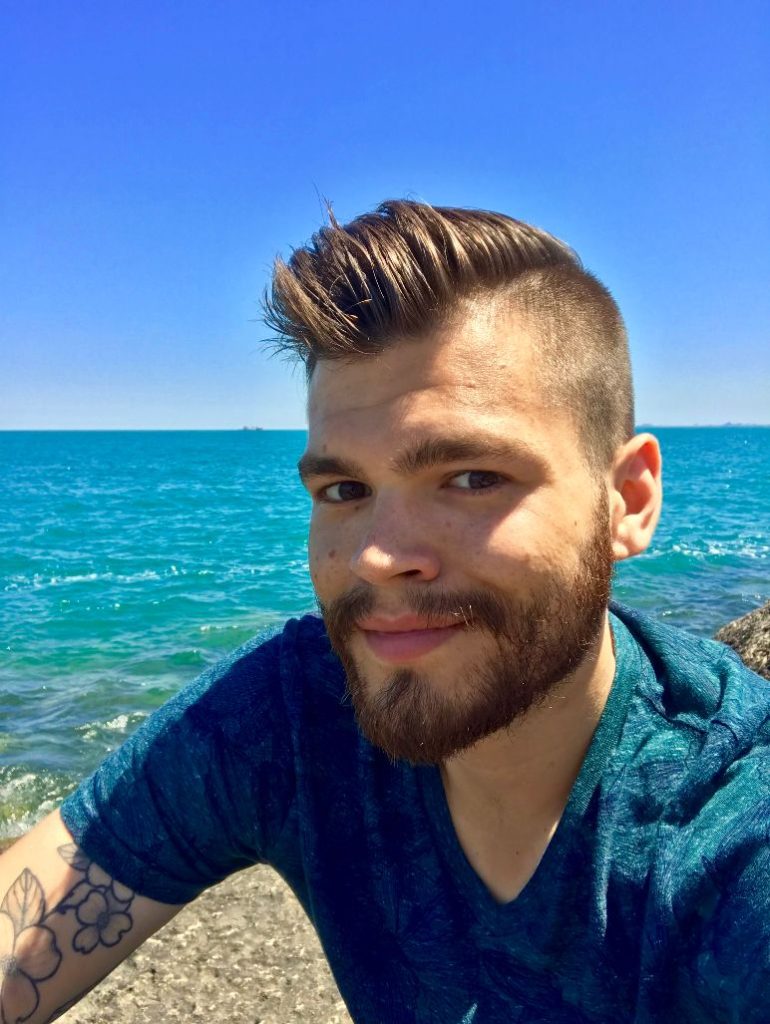 Before each show, we like to introduce cast members who are making their debut with the HPCP. Today we introduce Ryan Kacani, who plays Orlando in As You Like It. Performances are free in Nichols Park July 20-22 and 27-29, starting at 6pm.

Q. How did you hear about As You Like It, and what made you decide to audition for it?

RYAN: I noticed the flyers going up around the neighborhood, but I was already keeping my eye out for them. I had wanted to get back into acting and I knew HPCP puts on a Shakespeare production each summer.

Q. How did you get interested in acting? Do you have a favorite play, or a favorite role that you’ve played?

RYAN: I started working tech for shows in middle school and started acting a few years later in high school. It started because I had a few friends who were in, I think, Fiddler on the Roof, Junior, and they needed stage hands.  My favorite role so far was a Goblin King David Bowie inspired Oberon in a glam rock Midsummer Night’s Dream my best friends and I collaborated on in our senior year of college. Although, I think my favorite production as a whole was a Much Ado About Nothing I co-directed a few years before, where we turned the show into an episode of a ‘90s sitcom set on the eve of Y2K.

Q. What’s your experience with Shakespeare up to this point been like? Has being in As You Like It changed your take on Shakespeare?

RYAN: In college I joined a Shakespeare troupe and participated in almost exclusively Shakespeare productions. In my experience the versatility of Shakespeare’s soap-operas provides incredible creative opportunities and attracts some wonderfully talented people. I’m not sure I can say As You Like It has really changed my take on Shakespeare, but it certainly highlights some of his more absurd habits, and I’ve had a great time working on the show!

Q. At what point do you think Orlando really falls in love with Rosalind? Is it all over as soon as he sees her at the wrestling match, or does it happen during their time together in the forest of Arden?

Q. In the text, Oliver’s hatred of Orlando isn’t really motivated. How are you and Amelia approaching that relationship? Do you have some kind of backstory worked out for that?

RYAN: Siblings have such a unique attachment that comes from a literal lifetime of emotional intimacy. And even though stressful moments, like the death of a parent, can bring out the worst parts of that relationship, it doesn’t mean that all the positive, loving parts aren’t there as well. I think Amelia and I have really tried to make Oliver and Orlando feel like true siblings, who might seem like they absolutely hate each other for a time, but still bear a great amount of love and respect for each other.

RYAN: For me the most enjoyable and most challenging aspects of Orlando are one and the same. Orlando doesn’t even wear his heart on his sleeve; it’s basically strapped to his forehead where everyone can see it. He’s on an emotional roller coaster throughout the entire show, and even if he’s at his happiest peak in Arden, the underlying uncertainty about his place in the world never really goes away. Connecting with that sort of pure emotional energy can be challenging at times, but it’s also been incredibly rewarding.

AUDITIONS for Summer Outdoor Shakespeare (As You L...
Our Shakespeare workshop has been postponed.
Twelfth Night Introductions: Meet Sabrina Sawyer, ...
The “Cast” Days of Judas Iscariot

Founded in January of 2009, the Hyde Park Community Players is a non-profit, amateur, volunteer organization whose mission is to create compelling theatre by and for residents of the South Side. END_OF_DOCUMENT_TOKEN_TO_BE_REPLACED

You can make your contribution to our work here at the Hyde Park Community Players. There are lots of ways to give! END_OF_DOCUMENT_TOKEN_TO_BE_REPLACED