BUY TICKETS TO AN EVENING OF HORROR AND SUSPENSE 10

This post introduces you to Saturday’s show, TERROR IN THE TWENTIETH CENTURY. Read about Friday’s show, GOTHIC BY GASLIGHT, here.

An Evening of Horror and Suspense has always been inspired by the golden age of radio. We set up the show as if it is the live broadcast of a vintage radio show, complete with an MC (Christopher Skyles, Your Host for the Evening), musical interludes (from the Hyde Sisters), and messages from our sponsors. The actors stand on stage and read from scripts while the SFX team produces live sound effects. The goal is to transport listeners back to the 1930s and 1940s, to a time before the Internet and television, when radio drama was the only kind of theater you could enjoy without leaving the comfort of your home.

For the first few years, however, most of the stories we presented were adapted by members of the HPCP from classic short stories. In 2014, we started incorporating vintage radio dramas written for and broadcast by Golden Age radio shows like Suspense!, Quiet Please, Mystery in the Air, et al. This shift toward vintage radio plays culminated last year’s thrilling and chilling Evening of Horror and Suspense 9, directed by Shonte Wesson and featuring a retrospective of Arch Oboler’s work for the classic radio show Lights Out. EOHAS 10 goes back to our first experiments with vintage radio plays in EOHAS 3, with Lucille Fletcher’s “Sorry, Wrong Number,” first aired on Suspense! in 1943. “Sorry, Wrong Number” is a classic of the genre, in which a lonely woman accidentally overhears two men plotting a murder and spends the rest of the play on the telephone trying to get someone to stop it. EOHAS 3 also included Wyllis Cooper’s famous “The Thing on the Fourble Board,” about oil workers whose drilling uncovers a terrifying Lovecraftian horror. Mary McCarthy directs “The Thing on the Fourble Board” for EOHAS10, with Dusty Trellis reprising her iconic performance in the title role. EOHAS 3 is also represented here by Paul Baker’s adaptation of Saki’s humorous yet haunting “The Open Window.”

Ray Bradbury (1920-2012) is one of the founding figures of modern science fiction, and a longtime EOHAS favorite. For EOHAS 2, Bill Hohnke adapted Bradbury’s haunting and bleak short story “The Scythe,” in which a father at the end of his rope finds a house and a farm that seem like the answer to his family’s prayers…until he realizes what it is that he’s reaping. Paul Baker, who is also directing sound effects for EOHAS10, directs “The Scythe.” Mary McCarthy sound effects director for EOHAS 4 and director of EOHAS 5, first introduced us to George Lefferts’s 1950 radio adaptation of Ray Bradbury’s delightfully disturbing “Zero Hour,” set in a utopian near-future in which all the children are playing a game called “Invasion.” 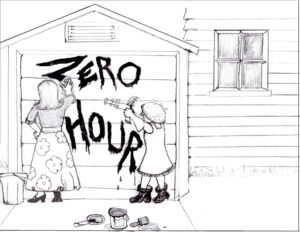 The other leading light of mid-century American fiction represented on Saturday’s program is Shirley Jackson (1916-1965). The author of horror classics like We Have Always Lived in the Castle and The Haunting of Hill House, Jackson horrified readers of The New Yorker in 1948 with her dark short story “The Lottery,” about a close-knit village in New England whose idyllic surface conceals a terrifying secret. Mary McCarthy directed Ernest Kinoy’s 1951 radio adaptation of “The Lottery” (written for NBC Presents: Short Story) for EOHAS 5.

“The Marriage of Bette and Boo” by Chr...
FRIDAY STAGED READING: She Kills Monsters by Qui N...
Updated Information on Coronavirus situation
Who’s Who in The Last Days of Judas Iscariot...

Founded in January of 2009, the Hyde Park Community Players is a non-profit, amateur, volunteer organization whose mission is to create compelling theatre by and for residents of the South Side. END_OF_DOCUMENT_TOKEN_TO_BE_REPLACED

You can make your contribution to our work here at the Hyde Park Community Players. There are lots of ways to give! END_OF_DOCUMENT_TOKEN_TO_BE_REPLACED