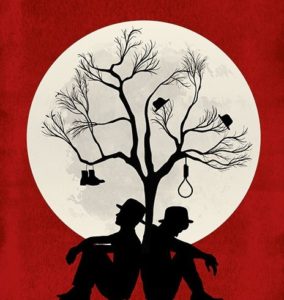 Val and Ester are two actors waiting backstage as understudies, while they pass the time talking, fighting, learning, and singing with recurring subjects of time, suffering for your art, and following rules. Where in Beckett’s work the actors are waiting for Godot, in this production that unknown entity is switched out for the ever elusive and intimidating director. Quips are made that mock actors and the experience of being in the theatre/theatre classes/show business.  (Shoshana Roberts – theasy.com)

Friday, March 6, at 8 pm, at Augustana Lutheran Church, 55th & Woodlawn.  The reading will be followed by refreshments and a chance to talk with the director and cast about the play. $5 at the door.

Turns out, the only people who truly understand Beckett’s Waiting for Godot are the understudies!

Founded in January of 2009, the Hyde Park Community Players is a non-profit, amateur, volunteer organization whose mission is to create compelling theatre by and for residents of the South Side. END_OF_DOCUMENT_TOKEN_TO_BE_REPLACED

You can make your contribution to our work here at the Hyde Park Community Players. There are lots of ways to give! END_OF_DOCUMENT_TOKEN_TO_BE_REPLACED