We have reached the magical point in the show life cycle when the number of things about the process that I can actually control and/or do myself begins to shrink. It starts, at this point, to be more about letting other people do their thing with props or lights or sound or the set. And so it was that this weekend, at the home of the flying Hammond-MacGregors, a number of curious passersby gathered to drink in the spectacle of eight or ten grown men and women sitting on the grass painting multicolored blobs on 8×9 sheets of house wrap.

These are going to be the mysterious ‘screens’ that I have been talking about in rehearsal since day one. There are three separate interior locations in this play. Set changes are always a problem for us, because we’re never performing in a space designed to facilitate them. Whether it’s the Experimental Station, the University Church, or Augustana, there’s no place to store extra sets, and there’s no way to lift or lower things. We don’t have machinery of any kind; anything that gets moved onstage has to be moved with people power. Over the past many years we have approached this problem in various ways, some more elaborate than others.

What I decided to try this time was to mount a bunch of fabric panels on frames which could be moved into different configurations to create different rooms. Adam has already built the metal frames; at earlier set build weekends we measured, cut, and hemmed (with grommets!) the panels. (Thank you Jake, Gyuri, Michele, Dan Heinz, Corinna, and Bill, who were an invaluable part of that process.) This weekend we got to start painting them.

There are eight of these panels; some will be used for more than one set, some are for one set only. The panel pictured above, which Adam has fondly named “Window,” is for the Chilterns’ ‘Morning Room,’ in which Act II and Act IV take place, and just about everyone who showed up this weekend (THANK YOU ALL) had a hand in making it as awesome as it is. It was a real HPCP jamboree, with most of the cast there as well as perennial set build stalwarts like Scott Malpass, Dave Lashway, and Dusty Trellis.

The bookcase panel below, which Corinna, Amelia, Meara, and I finished today, will be used in Goring’s study but will also appear in the Chilterns’ house: 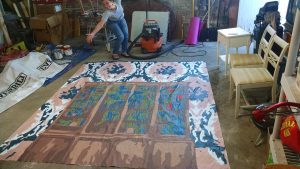 Of course the one that is going to take longest to finish, and the one that was driving everyone most insane over the weekend, was the center panel for the Act I set, which is the Octagon Room at the Chilterns’ house. It is the fanciest and the most complicated–partly thanks to complications I accidentally introduced during the tracing process. Wilde’s stage direction specifies that the room is dominated by a tapestry featuring Boucher’s “The Triumph of Venus.” The choice of subject matter is thematically important, not only for the art theme that I mentioned in my last blog, but because it sets up the battle-of-the-sexes aspect of the script. Wilde indicates, in his final stage direction for Act One, that right after Robert gives in to Gertrude and agrees to write the letter to Mrs. Cheveley saying that he cannot support her in her dishonest scheme (yes! Write the word dishonest! She knows what that word means!), all the lights go out except for one illuminating “The Triumph of Venus.” Lady Chiltern has won this round…but there are three more rounds to go. 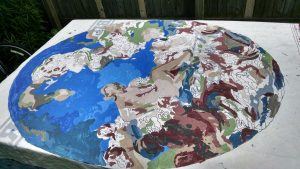 In An Ideal Husband, Venus is definitely not triumphant over the long term. In the world of the play, women can achieve temporary ascendancy over men; but over time, the men band together to protect each other against whatever threat women might represent. “How you men stand up for each other,” Mrs. Cheveley snorts, as Lord Goring tries to rationalize Sir Robert’s act of corruption and betrayal; and as much of a liar, thief, and schemer as she may be, about that she’s absolutely right. Goring cares far more about protecting Sir Robert than he does about anything else–even about Lady Chiltern, whom he seems to genuinely like, but whom he does not hesitate to sacrifice when her principles appear to be threatening Robert’s happiness.

In one of the other entries I mentioned the well-made play and the convention of the “scene a faire”–the big showdown between the protagonist and the villain whose machinations threaten the safety of the family or its members. In the same way that instead of incorporating one sensitive letter (another WMP convention), An Ideal Husband incorporates two, instead of having one scene a faire, An Ideal Husband has at least two and possibly four, depending on how many heroes you think it has. Each of the four acts ends with an argument between a man and a woman. In Act I and Act II, it’s between Sir Robert–the “ideal husband” of the title–and his wife Gertrude. In Act III and Act IV, it’s Lord Goring holding up the men’s end of the scene a faire, with two different antagonists–Mrs. Cheveley in Act III, and Gertrude in Act IV. Until we get to Act IV, it’s unclear whether Venus will emerge triumphant. Gertrude wins Act I. Nobody wins Act II–Gertrude and Robert are both intensely miserable after that conversation, though of course they express it in different ways. In Act III, Goring gains the upper hand…until Mrs. Cheveley swipes Gertrude’s letter to him right out from under his nose.

In the end, Mrs. Cheveley is defeated not so much by Goring’s derring-do–though it is extremely important that Goring extorts the incriminating evidence from her and destroys it–as by Robert and Gertrude’s faith in each other. Robert is wrong about a lot of things, but not about Gertrude’s faithfulness; and Gertrude is unreasonable about a lot of things, but she’s not unreasonable enough to let Goring take the fall for her when he’s just saved her marriage. As fantastic a villain as Mrs. Cheveley is, the case can be made that the play’s real antagonist–the person who really needs to be defeated, and who is hardest to defeat–is Gertrude herself. Cheveley can be expelled from the situation like any other villain. The real problem is how Gertrude and Robert are going to go on living together and loving each other; and to solve that problem, Gertrude has to give up something she dearly wants. At the beginning of their Act IV reconciliation, Robert addresses Gertrude as “my love;” after what we’re calling her capitulation speech, he joyously embraces her to him as “my wife! My wife!”

Anyway, all this is to say: there is a reason why we have a huge painting of a naked woman in the middle of our Act I set, and I am extremely grateful to everyone who’s put in the time to realize it. Our Venus is as yet only partially triumphant; but she will certainly get there, thanks to everyone who worked on her over the weekend, especially Meg, Leslie H, and Paul.

I’ve been to a lot of set builds; but I don’t think I’ve ever enjoyed a set build weekend more than this one. Once the colors are mixed and the tracing and labeling is done, these panels basically become a giant adult coloring book for people to fill in. The weather’s been beautiful, and Adam’s got a lovely and comfortable front lawn. All we need is to paint another five of these things, and we’re good to go!

The View from the Bench: Love and THE LAST DAYS OF...
We did it! and a defense of Durang
RASHOMON Introduction: Meet Brian Furner, Musician
Twelfth Night Introductions: Catch up with Sasha A...

Founded in January of 2009, the Hyde Park Community Players is a non-profit, amateur, volunteer organization whose mission is to create compelling theatre by and for residents of the South Side. END_OF_DOCUMENT_TOKEN_TO_BE_REPLACED

You can make your contribution to our work here at the Hyde Park Community Players. There are lots of ways to give! END_OF_DOCUMENT_TOKEN_TO_BE_REPLACED